Need info or help?
Get it here
About Us
Resources
Projects
Education + Training
News + Events

Alcohol is a drug too!

Alcohol is a Drug Too! was the theme for Drug Action Week in 2008 and 2009. From this theme DEN ran a Tasmanian Mass Media Campaign aimed to raise awareness around the harms of alcohol through promotion of the messages “Alcohol Is A Drug Too!”

The need for such an initiative was identified through a review of then-current evidence.

The 2007 National Drug Strategy Household Survey found that 86% of Tasmanian’s over the age of 14 years drank alcohol. Of these:

According to National Drug Research Institute data, Tasmania had the third highest mortality rate in young people aged 15 – 24 years in Australia. And, in 2007, alcohol was implicated in just under a third (31%) of serious casualties involving drivers aged 17-29 years. Of these, the majority (51%) involved young people less than 21 years of age.

The DEN ran a youth poster competition across Tasmania during Drug Action Week in 2009 to create a range of peer targeted posters to raise awareness of the Alcohol is a Drug Too! message. Five posters were selected to feature in a Tasmania mass media campaign promoted through metro bus advertising, back of public toilet doors, Facebook, t-shirts, billboards, newspapers, select magazines and posters placed in educational institutions and community libraries. Outcomes of the project included the distribution of 7000 posters and almost 83 million estimated exposures to campaign advertising and materials.

The campaign evaluation identified that: 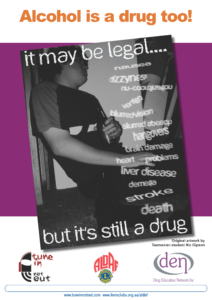 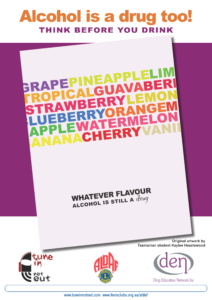 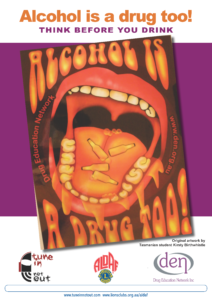 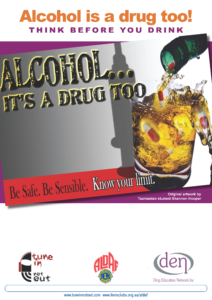 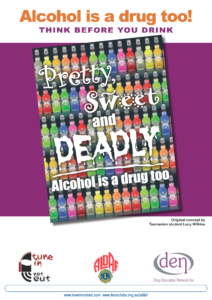 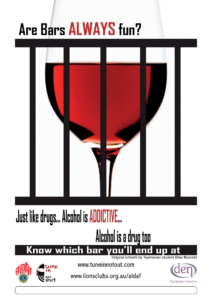 Back to Projects page